Posted on October 14, 2014 by Francois Lachance

Performance of “Crickets” a poem by Aram Saroyan, during Other Minds Festival 23 – Sound Poetry: The Wages of Syntax. Recorded on April 9, 2018, at ODC Theater in San Francisco, California. 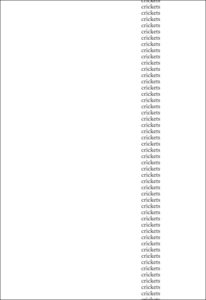 The 1975 version is rendered by one voice only… the 2018 version is more participatory and makes suggestive use of a recording of actual crickets to conclude. The score is wide open.

This entry was posted in Poetry and tagged Voice Ways. Bookmark the permalink.
This site is part of Humanities Commons. Explore other sites on this network or register to build your own.
Terms of ServicePrivacy PolicyGuidelines for Participation