Posted on September 16, 2014 by Francois Lachance

At first, we thought simply to build a game […] But as we began conceptualizing the game, we realized that we were actually building a world; material in that particular game arose from construction about the environment and characters that was larger than the content of the game itself.

Laurel’s report suggests to me that world and narratives and games arise from acts of narration which are ways of constructing. 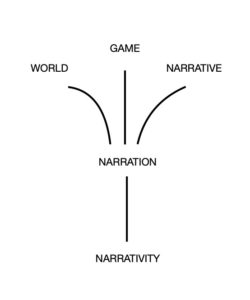 Decoupling narration from narrative (discourse still gives rise to story but it also can result in world or game) … narrativity is the potential for formulating sequences from semiotic material (it need not be verbal); narration is the production of sequences and their recombination; narrative, world and game are products of acts of narration (thought through an expansive notion of manipulating sequences). This conceptualizing of the relations build upon earlier efforts.

From Ludological Retelling to Possible Worlds

This entry was posted in Reading, Storytelling. Bookmark the permalink.

This site uses Akismet to reduce spam. Learn how your comment data is processed.

This site is part of Humanities Commons. Explore other sites on this network or register to build your own.
Terms of ServicePrivacy PolicyGuidelines for Participation
Skip to toolbar