for Pauline and Désirée

So glad you signed up for the weekly Wabi Sabi info flow.

This week — surprise — there are no pictures.

I was looking at the well seasoned wok in which almost nothing now sticks. I thought of our well-seasoned cast iron frying pans. And a crepe pan and an omelette pan which we acquired for those special occasions when you whip up batter or get cracking.

In any event it made me ponder the nature of wabi sabi surfaces — are they meant to have a fine patina where nothing sticks or are they meant in some cases to trap rain droplets, seeds, and dust.

Is there a difference in the wabi sabi essence of a well seasoned pan or one that that has rusted? Neither in my opinion they both offer humans with something to do …

This week I invite you to think about time series and wabi sabi.

But there is also instant wabi sabi.

I recently found some tulips left at the curb side near a plastic bottle of water (with some water left in it) and so the reclining tulips received a little shower and I snapped a picture. Wabi Sabi is about the transience of all things and so itself need not last forever.

Left the water bottle in the picture for good measure.

Indeed, in our house bouquets

tend to last well beyond what a real estate stylist would want in staging a house for sale. We have house lived in. In French a still life is called a “nature morte” and we love to see the various parts of the flower head that get exposed when the petals shrivel.

Half the fun of wabi sabi is the process of witnessing the weathering or the fading or the aging and not just contemplating the final product for that product too is subject to time.

This will be the last of my little speeches on wabi sabi. I may have exhausted what I want to say at the present moment but not my commitment to exploring wabi sabi through images.

I shot this picture in a lane near us called appropriately “Shady Lane”. It’s a picture of a gate and fence with a canoe rack to one side. I draw your attention to the gate. It is not made out of the trellis work that composes the fence. It is actually a piece of board painted to imitate the trellis. Fascinating piece of mimesis. Is the fencing imitating the gate or the gate, the fence? 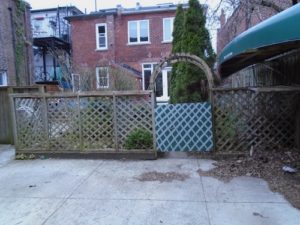 This reminds me that wabi-sabi (as it is usually spelt with a hyphen) is actually two words: wabi and sabi. The hyphen acts like a gate linking the two concepts.

Here’s a little bit from a Wikipedia entry

The words wabi and sabi do not translate easily. Wabi originally referred to the loneliness of living in nature, remote from society; sabi meant “chill”, “lean” or “withered”. Around the 14th century these meanings began to change, taking on more positive connotations. Wabi now connotes rustic simplicity, freshness or quietness, and can be applied to both natural and human-made objects, or understated elegance. It can also refer to quirks and anomalies arising from the process of construction, which add uniqueness and elegance to the object. Sabi is beauty or serenity that comes with age, when the life of the object and its impermanence are evidenced in its patina and wear, or in any visible repairs.

Happy to continue exchanging pictures. I am going to be quiet for a while. Work in the garden. Repairs.

This entry was posted in Gardens, Perception, Storytelling. Bookmark the permalink.
This site is part of Humanities Commons. Explore other sites on this network or register to build your own.
Terms of ServicePrivacy PolicyGuidelines for Participation