There is this cartoon by Mike Baldwin, the creator of Cornered, which shows what looks like a boss showing off a new bookcase and remarking: “I wanted a bookcase with a secret door that led somewhere magical, mystical and mysterious. But this one was on sale.”

So the implication is that the character settled for a cheaper version. But the evidence is even more damning. The magical portal is there. It’s in the books waiting to be read and even in the empty space to be filled by the joying of hunting for other books. The guy is not so much cheap as illiterate. 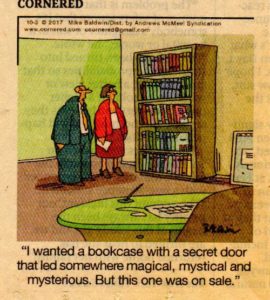 It took me awhile to get past the monetary remark and conclude that literacy is a companion beyond the price of rubies.

This entry was posted in Booklore, Reading. Bookmark the permalink.
This site is part of Humanities Commons. Explore other sites on this network or register to build your own.
Terms of ServicePrivacy PolicyGuidelines for Participation