Posted on April 4, 2014 by Francois Lachance

However, the failure to distinguish between manners and morals also suggests, erroneously, that from personal virtue, acceptable social behavior will follow effortlessly. All you need is a good heart, and the rest will take care of itself. You don’t ever have to write thank-you letters.

It is probably more sensible to hope that practicing proper behavior eventually encourages virtuous feeling; that if you have to write enough thank-you letters, you may actually come to fell a flicker of gratitude.

This is the theory of the Happy Hypocrite, most memorably illustrated in Max Beerbohm’s tale of the same name, in which an unpleasant and miserable man adopts a lifetime mask of smiling politeness that is found after his death to have transferred itself to his features.

The summary is a bit off. The revelation does not come after death. A spurned lover unmasks the man before his wife on their mensiversary. But all is well, the face beneath as taken on the features of the mask:

George stood motionless. La Gambogi stared up into his face, and her dark flush died swiftly away. For there, staring back at her, was the man she had unmasked, but lo! his face was even as his mask had been. Line for line, feature for feature, it was the same. ‘Twas a saint’s face.

There is always time for a thank-you. To Ms. Martin for her sage advice on etiquette. To Ms. Lurie for an insightful review. To Mr. Beerbohm for a pleasant conte. And to you Gentle Reader … 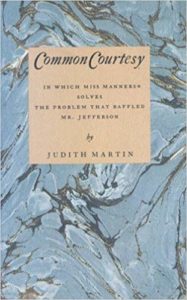