Rooted in memory of the Guyanese Corentyne coastline

He stands entranced by the sparkling sea
Frolicking, dancing and waving to music,
Rhythmically playa by rushing breeze.
He peers intently at the silver surf
Then gallops into the bustling brine,
Flattening waves in the path of his flight
And castes his net which mushrooms in the air,
And lands with a crash in the splashing sea
Entrappng the entire school of fish,
[…]

The casting of the nets in this particular fashion reminded me of seeing documentaries on television that capture such elegant gestures over the water. It is almost a set piece.

Curiosity piqued, I set off to search and found many illustrations to accompany the New Testament fisher-of-men trope. And this 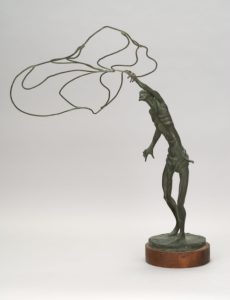 The moment arrested in flow. Continuing in the mind’s reach.