Posted on February 7, 2014 by Francois Lachance 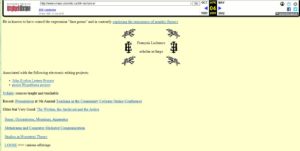 What you may ask is a home page?

A personal home page historically has served as a means of self-portrayal, job-related presentation, and pure enjoyment, giving way to professional advancement and social interaction.[12] Owing to the rise of social media sites, personal home pages are no longer as common as during the mid-late 1990s and early-2000s.

One of the components of a home page was a list of hyperlinks to other resources. Some featured quotations.

Some who look back want to graft an evolution. It’s a very seductive proposition:

Let’s give credit where credit is due, however, Bush’s memex and the eventual parlaying of that diagrammatic insight into what became a hypertext transfer protocol took writing to the next level of apparatus consciousness. At first, it was conceived as a recordable memory device, but soon it evolved into an inventive remix machine that simulates specific thought processes as ways of seeing and processing the social spaces inhabited by the artificial intelligentsia as it operates in a peer-to-peer (P2P) open source environment, breaking all the laws and conventions of identity construction. (This last line is now the second theory loop playing on the essay soundtrack, along with the line that ends “a nomadic Net artist driving in cyberpsychogeographical spaces.”)

Mark Amerika
“Cyberpsychogeography (An Aimless Drift in Twenty Digressions)” [An earlier version of this essay was originally published as part of the Ciber@art Bilbao 2004 conference proceedings] reworked in Meta/Data: A Digital Poetics

Allow me to play this back in slow motion and indulge in my own cyberpsychogeographical dérive and suggest that the move from recordable memory device to inventive remix machine is a bit of sleight of hand to support the contention of the outlaw nature of the artificial intelligentsia. All writing deforms. All drives through cyberpsychogeograpical spaces break/brake identity construction. To record is to remix. [Witness that memex is “sometimes said to be a portmanteau of “memory” and “index””.]

I once made a picture to capture the ways one could process/record info:
https://berneval.hcommons.org/2009/01/08/grids-lists-clusters/

I lavished some attention on the notion of story as container and riddle (in the sense of sieve). Storing, sorting (both involved in shuffling [remixing])
http://homes.chass.utoronto.ca/~lachance/S6.HTM

And later I indulged in transformation of an XML document into one of four HTML blog outputs depending upon the throw of a dice (one throw being reserved for non-transformation or non-passage).

In one of the corners of the Jardin is a quotation and comment (pertinent to any talk of “next levels”):

There is in the book On the Origin of Objects by Brian Cantwell Smith a passage that fascinates me.

World-directedness takes many forms. […] subjects (their experiences, representations, documents, intentions, thoughts, etc.) point or are directed towards the transcendent-but-immanent world that surrounds them. A symmetrically realist account per se supplies two of the requisite ingredients in this pointing: (i) the fact that subjects are in an enveloping world, which gives them a place to point from; and (ii) the fact that they are made of that same enveloping world, which gives them the wherewithal to point with. What a theory of intentionality needs to add is the far-from-obvious third ingredient: (iii) a way for subjects to orient towards that enveloping world, the world of which they are constituted and in which they live.

“‘Towards’ remains unpaired” — a theory loop.

All still there http://homes.chass.utoronto.ca/~lachance/ and joined by a few others.

And revisited thanks to the Time Machine and some remixing (sans concern with identity construction, except of a bad boy sort), remixing pointing towards memory and pointing.

This entry was posted in Perception, Reading, Storytelling, Translations and tagged Cognition, Intertexts, theory, Unconcern. Bookmark the permalink.
This site is part of Humanities Commons. Explore other sites on this network or register to build your own.
Terms of ServicePrivacy PolicyGuidelines for Participation