Posted on January 24, 2014 by Francois Lachance

CBC story on the equality dollar

The Royal Canadian Mint unveiled a new commemorative loonie on Tuesday meant to mark what it calls a key milestone for lesbian, gay, transgender, queer and two-spirited people in the country. The new coin, which features the work of Vancouver artist Joe Average, was launched at the 519 Community Centre in Toronto.

The commemorative loonie is its usually gold monochrome. But the ten dollar coin is resplendent in its polychrome glory. 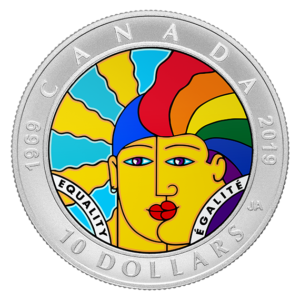 What is more evident on the multi-coloured coin is that there are two faces kissing something that can be missed on the loonie. Queen (Her Majesty) on one side; queens on the other (unless you take the androgynous pair to be luscious lesbians or some bi-combo).