Descant on the Descent of Dissent

Posted on January 3, 2014 by Francois Lachance

I thought there were pronounced distinctly differently (long e for descent; short i for dissent) until I read this accidental in a text by Andrew Steves.

Nonconformist publishers can be put at a considerable competitive disadvantage if their choice to exercise descent [sic] and develop alternative approaches is interpreted by a funding agency, jury or mega-retailer as unprofessional or retrograde, but they might be spared the indignities of engaging in activities which could turn out to be both financially and culturally ruinous.

I like the cognitive pull between the two homonyms. Descent carrying on a heritage and dissent deviating from some custom. As singular as the cover where “smoke proof” is pluralized only through sharing the last letter of the author’s name. 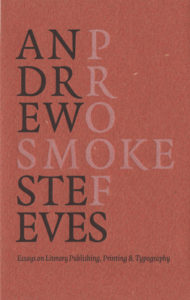 This entry was posted in Booklore, Uncategorized and tagged Accidentals. Bookmark the permalink.
This site is part of Humanities Commons. Explore other sites on this network or register to build your own.
Terms of ServicePrivacy PolicyGuidelines for Participation