Posted on December 14, 2013 by Francois Lachance

Somewhere somewhen June Jacobs spoke or wrote about the succession of small businesses in a health neighbourhood.

Street watchers were treated to a particularly interesting event following the closure of the Queen Video store on Bloor. 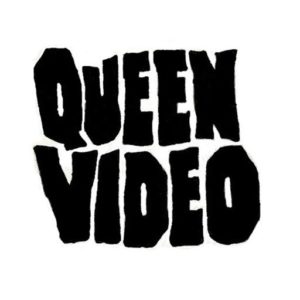 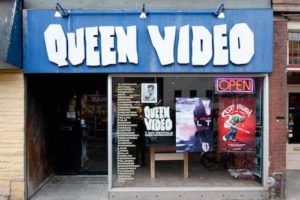 A theatre troupe took over the premises and offered an experience based on escape rooms. 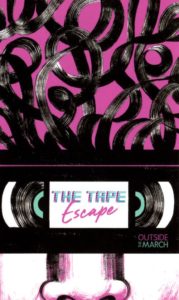 Outside the March gives QUEEN VIDEO a re-birth with an immersive escape room experience that invites you to PUT YOUR LIFE ON PAUSE.

Most video stores let you take the movies home. But at THE TAPE ESCAPE, the rentals happen to you, pulling you deep inside its collection of thousands of VHS Tapes. Disappear back into 1999 with this love-letter to the lost art of browsing. See if you can escape into (and out of) some of your favourite movies by selecting from our collection of “in store rentals”.

So is The Tape Escape an escape room?

Sort of. There’s no actual escaping. But it does use some of the same principles as escape rooms, like working collaboratively to solve a series of puzzles in a set amount of time. Think of it like a puzzle-infused scavenger hunt through an art installation.

Outside the March creates unforgettable immersive encounters—redefining the experience of theatre for a new generation of audiences.

We are dedicated to pioneering work that is:

IMMERSIVE: intimate and immediate theatrical encounters that endure
SITE-ENGAGING: transforming found spaces into playgrounds of performance
NEW: urgent stories that grapple with our here and now
WIDE-REACHING: inviting and exciting audiences who don’t normally find themselves at the theatre
COMMUNAL: forging resonant collaborations between artists of all levels of experience

In a word: dedicated to succession sensitive to the passing show.

This entry was posted in Ephemera and tagged Passages. Bookmark the permalink.
This site is part of Humanities Commons. Explore other sites on this network or register to build your own.
Terms of ServicePrivacy PolicyGuidelines for Participation