Mixed Use Has a History

Posted on November 26, 2013 by Francois Lachance

One iconic hangout was The Second Cup, which opened south of Church and Wellesley in 1984. The “Steps” at the front of the cafe, which became a 24-hour operation in 1992, was a hangout for gay youth and people of all ages. It was not uncommon to find crowds congregating at the Steps in the early morning hours.

Nathan Phillips Square – steps with people sitting on them – also serve as a stage. 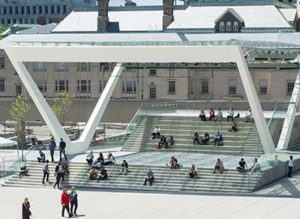