Posted on November 18, 2013 by Francois Lachance

Gay Bilson is known to me not only as a restauranteur by also as a collector of bird nests. Here she is commenting on a commission for the Museum of Economic Botany in Adelaide:

Which brings us to [historian and curator, Peter] Emmett’s second commission, given to the remarkable artist Fiona Hall. Hall’s most recent works have commented on our often unhealthy collision with the natural world: Tender is a series of exquisite bird’s nests woven from shredded American dollar bills; Leaf Litter consists of 200 banknotes from various countries, onto each of which Hall painted the leaf of an indigenous plant exploited by
colonisers.

After this aperçu of her career, the Bilson article goes on to describe the commissioned piece by Fiona Hall called Grove — it’s a modern cabinet of curiosities. 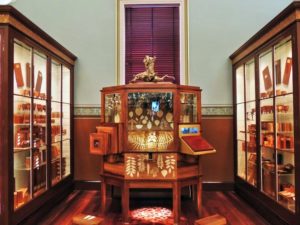 “Its botanical themed multimedia display is a quirky contrast to the antique appearance of the cabinet which contains it.”