Care of the Small

Posted on November 17, 2013 by Francois Lachance

The cover is special. It is of a felt that feels like peach fuzz.

Diana Henry
How to Eat a Peach
Introduction (its conclusion)

Meals, no matter how simple, are made better by small things […] They’re also made bad by small things: salami served in the plastic package in which it comes, poor bread. I don’t like the suggestions — prevalent these days — that cooking is all about “lifestyle.” I think it’s about taking care of the small, seemingly unimportant things.

The idea for this book came to me years ago; nearly all of my books have been in my head for a long time. In a single moment I realized how much other people, when cooking, care about these small things. At a restaurant in Italy (on my first trip there), the diners at the next table didn’t have a fancy dessert, they just had a bowl of peaches and a bottle of cold Moscato. Everyone sliced their peach and dropped it in the wine. After a while they drank the wine — now imbued with the flavor of the peach — and ate the peach slices, which now tasted of the wine. This was not a complicated dish, but it was lovely way to end a meal — seasonal, straightforward, caring, even a little magical — and it illustrated an approach to food and cooking that I already understood but hadn’t yet articulated. I’ve never forgotten this. More than a memory, those peaches became a symbol of what good food is all about. 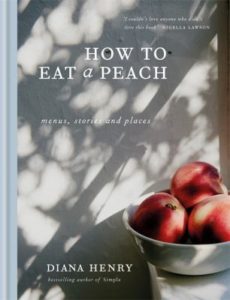