Posted on November 3, 2013 by Francois Lachance

I find anachronism to be a charming trope. I am particularly drawn to the markers of temporal irregularities.

Julia Cooper in The Last Word: Reviving the Dying Art of Eulogy describes how news spread of the death of President Lincoln.

Not that the public mourning of President Lincoln wasn’t aided and influenced by the period’s technology: the development of the railroad and the arrival of telephone lines literally connected the news of Lincoln’s death to the American population. People and news were travelling faster than ever […]

Lincoln dies in 1865; telephone patent granted in 1876. “Telephone” is of course an accidental: “telegraph” is meant.

After spotting this passage in Cooper, I had to search for “Lincoln and telephone”. And was rewarded by an image of the President holding a smartphone and poised to take a selfie, all rendered in the appropriate past-marking sepia tone. 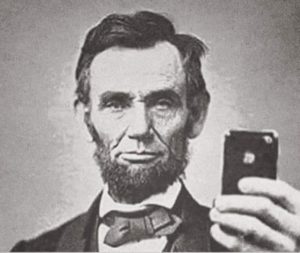 Please don’t say this was “photoshopped.” There was no Photoshop back then.

The caption found with this doctored image delivered a double dose of anachronism: “Please don’t say this was ‘photoshopped.’ There was no Photoshop back then.”

This entry was posted in Uncategorized and tagged Accidentals. Bookmark the permalink.
This site is part of Humanities Commons. Explore other sites on this network or register to build your own.
Terms of ServicePrivacy PolicyGuidelines for Participation