The Falcon, the Fish and the Heron

Denying oneself one’s prey to not become prey in turn…

Then there are the bird fanciers shops, where they train and sell falcons, hawks and other birds of prey. One day in his Majesty’s ante-room the Master of the Ceremonies told his Excellency that he himself saw a fine feat performed by a falcon, who seized a large fish in the air. He was flying at a heron who in the strife by instinct threw the fish which he had in his claw, into the falcon’s face, and thus escaped the enemy’s talons.

Anglipotrida by Horatio Basino
The Calendar of State Papers and Manuscripts Relating to English Affairs. Existing in the Archives and Collections of Venice, and in the Other Libraries of Northern Italy. Volume XV (1617-1619), Edited by Allen B. Hinds. (London, 1909)

This comes to me via a friend, Willard McCarty who kindly digitalized a sheaf of photocopies and brought my way the collection of observations about London processions and performances. His calligraphy adorns the bibliographic info: 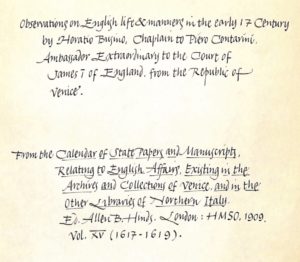 And in providing permission to reproduce his handwriting, Willard provides a tale of its route to Berneval…

I am so glad you like the observations on English manners. You certainly have my blessing to reproduce my handwriting. Years ago, but many years after I had graduated from skimming the State Papers [in Toronto], I loaned the photocopied pages to my former head of department here [London]. He then moved house, and in the process these pages found their way into a box that remained unpacked all the years he then lived in the new house. It was only when he moved again, from London to Edinburgh, that the box was unpacked, the pages in question discovered and returned to me. Yesterday I scanned them in.

So, a long journey and a new transformation.

And yet such a short interval between friends.