I first came across a portion of the illustration by Wesley Bates in a Gaspereau Press catalogue. 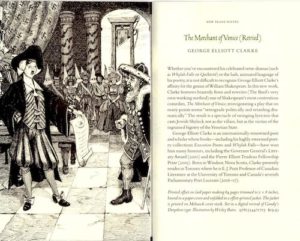 In the background you see figures in capriotes injecting a distinctly Klansman motif for which one finds a textual basis in the Forward Foreword.

I hope I’ve played down Shylock’s villainy, but played up the pro-Caucasian Christian Capitalist‡ (Apartheid-like) bias of the Venetian Republic.

‡This Trumpist “CCC” is the prelude to the KKK?

And if you look carefully at the curtains above the throne you will see swastikas.