Curononsky died in 1956. This bit comes from a volume edited by Jeni Wright published in English in 1989.

A menu, however, is not an abstract exercise. Its composition is based on whatever shopping has been done. A chef or a housewife with an eye for the quality of produce does not shop according to preconceived ideas, after first listing the ingredients needed for some arbitrarily chosen recipe. It is undoubtedly useful, however, to have some general plan in mind for the meal […] All the great chefs and “cordons-blues” confirm that obvious advantage of “cuisine du marché” (cooking according to the market), which gives preference to seasonal or early produce and allows the best relationship between quality and price.

Chez Panisse was 18 years old in 1989 (poster by David Lance Goines) and had a similar sensibility. 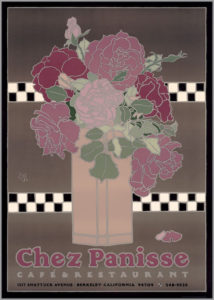