No Place for Dullness

For my purposes here, the core of humanism is the secular notion that the historical world is made by men and women, and not by God, and that it can be understood rationally according to the principle formulated by Vico in New Science, that we can really know things according to the way they were made. His formula is known as the verum/factum equation, which is to say that as human beings in history we know what we make, or rather, to know is to know how a thing is made, to see it from the point of view of its human maker. Hence Vico’s notion also of sapienza poetica, historical knowledge based on the human being’s capacity to make knowledge, as opposed to absorbing it passively, reactively, and dully.

With the eclipse of the divine that is presaged in Dante’s poem, a new order slowly begins to assert itself, and so the second half of Mimesis painstakingly traces the growth of historicism, a multiperspectival, dynamic, and holistic way of representing history and reality. Let me quote him at length on the subject:

Basically, the way in which we view human life and society is the same whether we are concerned with things of the past or things of the present. A change in our manner of viewing history will of necessity soon be transferred to our manner of viewing current conditions. When people realize that epochs and societies are not to be judged in terms of a pattern concept of what is desirable absolutely speaking but rather in every case in terms of their own premises; when people reckon among such premises not only natural factors like climate and soil but also the intellectual and historical factors; when, in other words, they come to develop a sense of historical dynamics, of the incomparability of historical phenomena and of their constant inner mobility; when they come to appreciate the vital unity of individual epochs, so that each epoch appears as a whole whose character is reflected in each of its manifestations; when, finally, they accept the conviction that the meaning of events cannot be grasped in abstract and general forms of cognition and that the material needed to understand it must not be sought exclusively in the upper strata of society and in major political events but also in art, economy, material and intellectual culture, in the depths of the workaday world and its men and women, because it is only there that one can grasp what is unique, what is animated by inner forces, and what, in both a more concrete and a more profound sense, is universally valid: then it is to be expected that those insights will also be transferred to the present and that, in consequence, the present too will be seen as incomparable and unique, as animated by inner forces and in a constant state of development; in other words, as a piece of history whose everyday depths and total inner structure lay claim to our interest both in their origins and in the direction taken by their development.

I turn to the cover and the ticket stub used as a book marker with the clever inversion of the usual “Admit One” — into the very democratic “Admit All”. 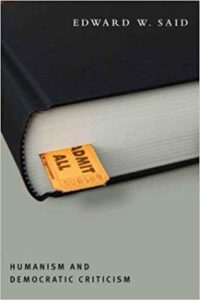 This entry was posted in Uncategorized and tagged Perspectives. Bookmark the permalink.
This site is part of Humanities Commons. Explore other sites on this network or register to build your own.
Terms of ServicePrivacy PolicyGuidelines for Participation