Garden Lore of Ancient Athens (1963)
Excavations of the Athenian Agora Picture Books No. 8
American School of Classical Studies at Athens 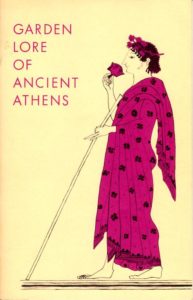 I am captivated by the story of the origin of the Corinthian order of columns in the section devoted to “Poetic Weeds”.

Also tall, but mauve white, is the spire of the acanthus (bear’s foot) which rises from a calyx of large foliate leaves. In Greece the spinosus grows wild, in Italy the more common type is the mollis; both species were cultivated in Greece. A sculptor of fifth-century Athens, Kallimachos, once saw an acanthus growing over a basket that had been set on the grave of a Corinthian girl by her devoted nurse. Struck by the rich plasticity of the curling leaves, he created the column capital that is still called ‘Corinthian’.

The tale’s source is Vitruvius.

This entry was posted in Gardens. Bookmark the permalink.
This site is part of Humanities Commons. Explore other sites on this network or register to build your own.
Terms of ServicePrivacy PolicyGuidelines for Participation