Posted on January 31, 2013 by Francois Lachance

We set here as a prelude to a page from Ronald Johnson Radi Os (Berkeley: Sand Dollar, 1977) what are the concluding lines of T.S. Eliot’s “Little Gidding”, the last of the Four Quartets.

Not known, because not looked for
But heard, half-heard, in the stillness
Between two waves of the sea.
Quick now, here, now, always—
A condition of complete simplicity
(Costing not less than everything)
And all shall be well and
All manner of thing shall be well
When the tongues of flames are in-folded
Into the crowned knot of fire
And the fire and the rose are one.

I have always thought that the rose and fire become one in the rose window of a cathedral whatever architectural splendours lie at Little Gidding. Regardless of my adolescent imagination, the lines serve me well here for not only the conjunction of fire and rose but also for the half-heard in the stillness.

Radi Os is a poem produced by erasure of the 1892 (Crowell) edition of Milton’s Paradise Lost. Some gentle soul has nicely paginated the library copy and on page 31, in a tiny hand, refers the reader to the front page. A transcription does not do justice to the spatial dynamics produced by the erasure: 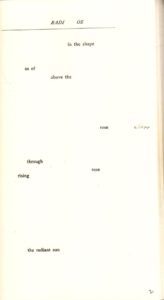 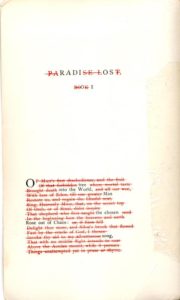 From book to book he has grown more responsive to light and pattern in nature; he believes that light evolved the eye to see itself […] These pages at first glance look haphazard (as a Cubist painting seemed to first viewers to be an accident). They are not. There is a page that has the word man at the top, flower in the middle, and star at the bottom. There are other words on the page, and they help us see the relationship between man, flower, and star. One order of word gives: man passed through fire / His temple right against The black. It is, for instance, electro-chemical energy in brain cells derived from photosynthetic sugars in vegetables whereby we can see a star at all, and the fire of the star we call the sun thus arranged that it could be seen and thought of by nourishing the brain. Is that system closed? Did the sun grow the tree the made the paper you are holding, and the ink on it, so that it can read this book through your eyes?

With a bit of rearranging the cycle fits the stream on screen.