Posted on January 29, 2013 by Francois Lachance

If there is any doubt about the technical term “bearing down” it would be dispelled by one look at the cover of Penny Chalmers (Penn Kemp) Bearing Down (Coach House Press, 1972). 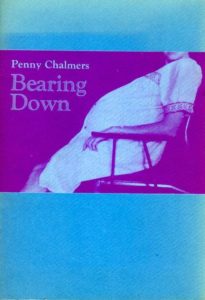 It is of course about the joys and tribulations of giving birth. But it is birthing in a particular space: the institution of the hospital. At the end of the book, there is a reproduction of a menu. It is obviously Easter time. 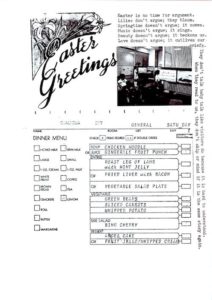 Which thanks to the World Wide Web we can ascribe to Frederick B. Speakman, author of sermons, in fine fettle for presenting an argument (“Easter is no time for argument” is itself an argument).

Down the right margin in landscape orientation is the a comment (we are uncertain in whose voice) it appears elsewhere as attributed to Patsy Gray (Age 9) from a piece about grandmothers:

They don’t talk baby talk like visitors do because it is hard to understand.
When they read to us, they don’t skip or mind if it is the same story again.

There are are more reproductions of hospital literature from the chaplain this time in which are interpolated other bits of unattributed sentimental poetry. For example

Said the Robin to the Sparrow:
“I should really like to know
Why these anxious human beings
Rush about and worry so.[“]

[which we trace to Elizabeth Cheney]

Both the hospital literature and the interpolations are in Courier, the ubiquitous typewriter typeface. We are faced with the question: did the poet place these in the spaces or were they found there? The one clue, layout of the interpolations in a perpendicular position, doesn’t apply to all the space cramming instances. All do share a crowding effect. There is quoting going on. Who is doing it remains uncertain. I vouch for ironic insertions by the author given the wry wit exhibited in a number of the birth poems all the while bearing down.