Posted on December 23, 2012 by Francois Lachance

The design of the cover is striking. It’s by Jodi Ballet. There are two shapes for the “i”. One is with its dot the same height as the “l” in “limbo”. The other is capped by a round nestled just inside the crook of the “t” “just” above. 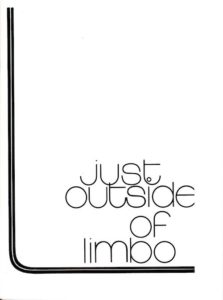 There is in this anthology a poem by Wayne Woodman called “dangerless” which has a beginning which alludes strangely to the character of Duncan, the haunter of laundromats and watcher of the machine ballet in Margaret Atwood’s The Edible Woman.

And later in the poem an allusion to Desiderata by Max Ehrmann … like a lost sock.