Posted on December 9, 2012 by Francois Lachance

Knowledge keeper, Kim Wheatley refers to these acknowledgements as “necessities” not “niceties”. 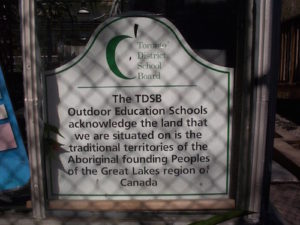 The sign reads: The TDSB Outdoor Education Schools acknowledge the land that we are situated on is the traditional territories of the Aboriginal founding Peoples of the Great Lakes region of Canada.

Toronto District School Board – Treaty Acknowledgements have two recitations: one for the Toronto Purchase area and the other for Williams Treaties area.

These necessities reorient one’s sense of time and space. They perform “Indigenous Orientations” to borrow the title of the introductory chapter to Mark Rifkin’s Beyond Settler Time. He writes:

Stories, then, give meaning to current and former occupancy in particular places while also conjuring the specificities of those places, producing kinds of experience and forms of relation that cross apparent temporal gulfs but do not arrive as an uncanny or spectral remainder. These connections to place exceed the terms of individual affect and transect the chronogeopolitics of settler policy and popular narratives. Everyday participation within such storying produces emotional and sensory investments in placemaking that give shape to and help animate collective processes of becoming and ways of being-in-time that can be understood as expressions of temporal sovereignty.

Conceptualized in this way, Indigenous duration operates less as a chronological sequence than as overlapping networks of affective connection (to persons, nonhuman entities, and place) that orient one’s way of moving through space and time, with story as a crucial part of that process.

Not just an encounter with the past. The TDSB acknowledgements conclude with a view to the present and the future: “I also recognize the enduring presence of Aboriginal peoples on this land.”

This entry was posted in Uncategorized and tagged Imagination, memory. Bookmark the permalink.
This site is part of Humanities Commons. Explore other sites on this network or register to build your own.
Terms of ServicePrivacy PolicyGuidelines for Participation