Posted on September 17, 2012 by Francois Lachance 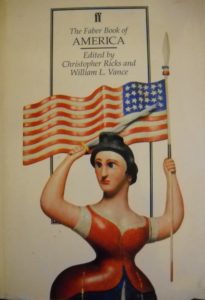 The 1994 edition is of flag and Mount Rushmore 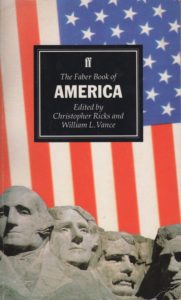 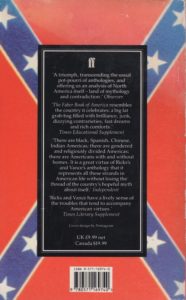 A triumph, transcending the usual pot-pourri of anthologies, and offering us an analysis of North America itself — land of mythology and contradiction.
Observer

There are black, Spanish, Chinese, Indian Americas; there are gendered and religiously divided Americas; there are Americans with and without homes. It is a great virtue of Rick’s and Vance’s anthology that it represents all these strands in American life without losing the thread of the country’s hopeful myth about itself.
Independent

Ricks and Vance have a lively sense of the troubles that tend to accompany American virtues.
Times Literary Supplement

The Faber Book of America edited by Christopher Ricks and William L. Vance.

This entry was posted in Booklore and tagged Paratexts. Bookmark the permalink.
This site is part of Humanities Commons. Explore other sites on this network or register to build your own.
Terms of ServicePrivacy PolicyGuidelines for Participation