Charm Bibbles Over and Over

Posted on September 10, 2012 by Francois Lachance

I had seen the title many times offered by various booksellers over the years. It was Ruby Tandoh’s savouring of the mean aunts that tipped me into actually reading James and the Giant Peach by Roald Dahl. And indeed Aunt Spiker and Aunt Sponge are as Tandoh’s says “really quite funny”.

Who is your favourite literary hero or heroine? Antihero or villain?

This is terrible and deeply childish, but Aunt Sponge and Aunt Spiker in James and the Giant Peach. They’re so cruel and awful and I kind of love them. They feed James burnt crumbs from the oven and make him run around after them all day and chop wood. They’re always bickering between themselves – you’re too thin, you’re too fat, you’re too lazy – I think they’re really quite funny. Merged together, I see something of myself in them. 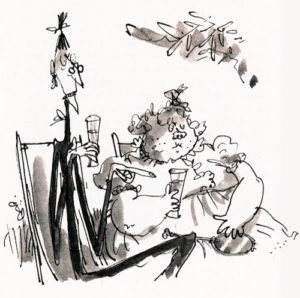 And now to the words of Dahl to see how captivating indeed is their description.

Their names were Aunt Sponge and Aunt Spiker, and I am sorry to say that they were both really horrible people. They were selfish and lazy and cruel, and right from the beginning they started beating poor James for almost no reason at all. They never called him by his real name, but always referred to him as “you disgusting little beast” or “you filthy nuisance” or “you miserable creature,” and they certainly never gave him any toys to play with or any picture books to look at. His room was as bare as a prison cell.

All that in one paragraph. Dahl is a prose master — rhythms build inside sentences and among them and occasionally an uncommon word sparkles. Take for instance this description of the bobbing peach:

And indeed they were. A strong current and a high wind had carried the peach so quickly away from the shore that already the land was out of sight. All around them lay the vast black ocean, deep and hungry. Little waves were bibbling against the sides of the peach.

To bibble: the OED informs us is like the dabbling of ducks.

Perfect word in the perfect place and likewise the virtuoso performance of course is at play when describing a virtuoso, the Old-Green-Grasshopper:

He was using only the top of his back leg (the thigh), and he was stroking this up and down against the edge of his wing with incredible skill, sometimes slowly, sometimes fast, but always with the same easy flowing action. It was precisely the way a clever violinist would have used his bow; and the music came pouring out and filled the whole blue sky around them with magic melodies.

Apt self-description of the words on the page!