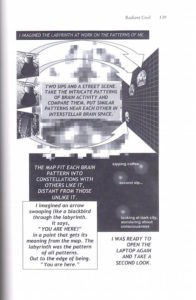 I imagined an arrow swooping like a blackbird through the labyrinth. It says “YOU ARE HERE!” in a point that gets its meaning from the map. The labyrinth was the pattern of all patterns. Out to the edge of being. “You are here.”

A few pages later, our hero moves on from here.

I nudged the mouse and set the universe into a slow spin. I had spent two years in graduate school sorting labels into piles: subject vs. object; mind vs. body; body vs. world; perception vs. action. As I looked across the nebula, none of these big distinctions seemed quite right. Each planet overlapped both sides of every ‘vs.’ All the pattern planets were ways of interacting with the world, and the whole map showed bodies animating perception while perception illuminated bodies. The world and I get along. We collaborate with hands, with eyes, with ears and lips. Our getting along is the world; it’s me, too. I make the world that makes me.

Tucked into this book, written on an index card, was an injunction to “confront the anti-text bias.” It poses a question.

What causes or sets up the instruction to “put similar patterns near each other in interstellar brain space”? Alternative. Computation — with rewrite rules & history of rewrites — i.e. not about holding pattern but about shifting pattern to and fro and then up & down. “I make the world that makes me” Contraries —> contradictions. There has to be oscillation of a digital nature then a leap to 4 via not here/not there and not[not here not there].

There is a little diagram to accompany these words. It presents P at t1 —> Pa at t2.

P & Pa, I take to mean sets of patterns. And it seems that the route between sets is accomplished through the trajectories of a semiotic square. Which at this late date we can gloss as me/not me and not[me not me]. Bringing the far apart closer? Wedging the close apart?

This entry was posted in Perception, Reading and tagged Cognition. Bookmark the permalink.
This site is part of Humanities Commons. Explore other sites on this network or register to build your own.
Terms of ServicePrivacy PolicyGuidelines for Participation