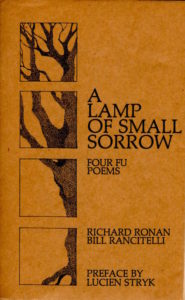 Lucian Stryk in the preface concludes

But what impresses me most about A Lamp of Small Sorrow is not so much its closeness to Taoism or Zen, though the closeness is palpable and altogether present in each section. Rather it is the feeling that the sequence had to be written, and that the poet, seemingly lost and overwhelmed in a harsh impoverished landscape, rises above it through meeting it directly, honestly and with great sensitivity. Richard Ronan in this lovely book tells the story of a spirit encountering its absolute context.

A note of abstraction that would seem amiss were it not for the exergue on the facing page.

of sorrow let oil be made
let rags of sorrow
be made into wicks
mark out the stars
for each season
make of these
a lamp of small sorrow
be brave, old friend, be brief

And glowing in this body of work are illustrations by Bill Rancitelli each as suggestive as this one capturing the feel of spring: eyes shielded from the light and scanning the skies and an armful of pussy willows, dog sniffing the damp earth — all bespeak of anticipation. 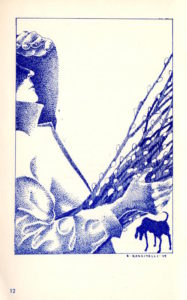 Word and image moving the mind to contemplation.