From a 1993 group show, these three posters by Richard Hydal provide a note of defiance to the show’s title: I Love You But You’re Dead. 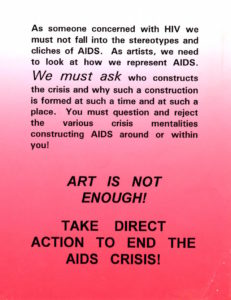 As someone concerned with HIV we must not fall into the stereotypes and cliches of AIDS. As artists, we need to look at how we represent AIDS. We must ask who constructs the crisis and why such a construction is formed at such a time and at such a place. You must question and reject the various crisis mentalities constructing AIDS around or within you!

ART IS NOT ENOUGH! TAKE DIRECT ACTION TO END THE AIDS CRISIS! 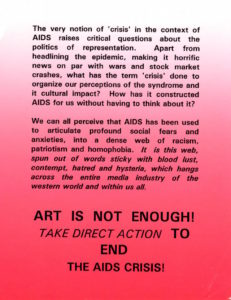 The very notion of ‘crisis’ in the context of AIDS raises critical questions about the politics of representation. Apart from headlining the epidemic, making it horrific news on par with wars and stock market crashes, what has the term ‘crisis’ done to organize our perceptions of the syndrome and it[s] cultural impact? How has it constructed AIDS for us without having to think about it?

We can all perceive that AIDS has been used to articulate profound social fears and anxieties, into a dense web of racism, patriotism and homophobia. It is this web, spun out of words sticky with blood lust, contempt, hatred and hysteria, which hangs across the entire media industry of the western world and within us all.

ART IS NOT ENOUGH! TAKE DIRECT ACTION TO END THE AIDS CRISIS! 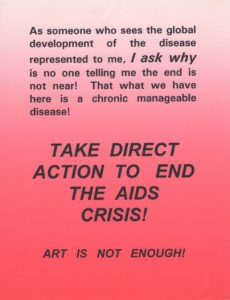 As someone who sees the global development of the disease represented to me I ask why is no one telling me the end is not near! That what we have here is a chronic manageable disease!

ART IS NOT ENOUGH!

And with these bleeding colours and words, we revisit that tombstone: 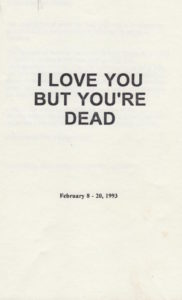 The mourning is carried over into the fight for the living.

This entry was posted in Ephemera. Bookmark the permalink.
This site is part of Humanities Commons. Explore other sites on this network or register to build your own.
Terms of ServicePrivacy PolicyGuidelines for Participation