Steno pads sometimes get buried in the book shelf which results in an asynchronous dialogue between entries distanced in time. For example, this entry from 2001 is revisited in 2002.

Rumi has a line about being the moisture in an oyster that helps form a pearl. Interesting how so much of the creation of a pearl is credited to the speck of irritant that launches the process.

And the very page of the steno pad gives us a string — a red line down the page. 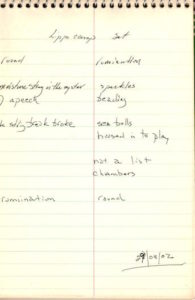 Very happy with the play on words: nautilus, not a list. And the spiral image it conveys out of two columns.

This entry was posted in Poetry, Transcriptions and tagged Pun. Bookmark the permalink.
This site is part of Humanities Commons. Explore other sites on this network or register to build your own.
Terms of ServicePrivacy PolicyGuidelines for Participation