Stepping Out by Stepping In

Step out into the Planet,
Draw a circle two feet round.

Inside the circle are 300 things
nobody understands and,
maybe, nobody’s ever seen.

How many can you find?

Can you hear the intonations similar to Stein’s in the 1967 recording housed at PennSound https://media.sas.upenn.edu/pennsound/authors/Welch/Magic-Lantern_04-22-67/Welch-Lew_18_Step-Out-Onto-The-Planet_Magic-Lantern_Santa-Barbara_04-22-67.mp3? He did after all write a thesis on Stein.

I came across this reproduced in a catalogue from Ken Lopez Bookseller. The description:

454. WELCH, Lew. “Step out onto the Planet…” [San Francisco]: [Four Seasons], 1964. A broadside poem, 9 1/2″ x 12 1/2″, reproducing Welch’s handwriting and design, limited to 300 copies sold on the occasion of a reading by Welch, Gary Snyder and Philip Whalen, longtime friends who first met when they all attended Reed College, a progressive school in Oregon, and who later became three of the most influential poets of the Beat generation. The sentiment of this poem — a sense of the mystery and wonder of the earth, expressed in a few simple lines — captures an essential element of the sensibility ignited by the Beats in our culture. Signed by Welch, who, although less well-known than his former classmates, was nonetheless one of the most important poets of the era. Matted; fine.

What of course attracted to me was the calligraphy and the brushwork of the circle at the top of the broadside. 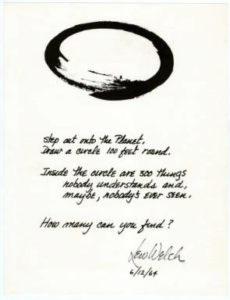 It looks ripe for contemplation.