Modes of Being Out of the World

Sara Guyer Reading with John Clare: Biopoetics, Sovereignty, Romanticism explores the poetics of homelessness. It takes on an existential character. For example, about the poem “I am” she references Bridget Keegan

Bridget Keegan reads the end of this poem as aiming for the possibility of experiencing the “world without us” in “The World Without Us: Romanticism, Environmentalism, and Imagining Nature,” in A Companion to Romantic Poetry ed . Charles Mahoney (Malden, Mass.: Wiley-Blackwell, 2010), 554-68.

I juxtapose this with a performance by The Four Horseman [bp Nichol, Steve McCaffery, Paul Dutton, and Rafael Barreto-Rivera.] who use lines from this Clare poem in counterpoint to a Spanish/English line (“My shoes are dead, oh microphone”). A recording of the Four Horseman is on the Canadada album, digitally available from the Penn Sound archive, see Matthew’s Line.

Stephen Scobie in relating the The Four Horseman performance situates the poem as less about imagining a world without humans [Keegan] and more as a sad poem about isolation (its author being confined to an asylum). He interprets as he quotes in bpNicol: What History Teaches:

The poem speaks pathetically of Clare’s sense of despair, abandonment, and isolation, both within the physical asylum and within his increasing insanity:

I am: yet what I am none cares or knows
My friends forsake me like a memory lost,
I am the self-consumer of my woes

The poem then moves to Clare’s longing for escape, even if only through death:

I long for scenes, where man hath never trod
A place where woman never smiled or wept —
There to abide with my Creator, God,
And sleep as I in childhood sweetly slept,
Untroubling, and untroubled where I lie,
The grass below — above the vaulted sky.

Out of context, the poem is a fine example of the Romantic desire for transcendence into a pantheistic unity of Nature; in the context of Clare’s life, it points to the fineness of the dividing line between extreme Romantic sensitivity, the solitary genius of the poet and clinical insanity.

Here I turn again to Sara Guyer who like The Four Horseman in a sense makes John Clare strange. This she does in part by resisting the mad poet reading and insisting on the dash (“‘untroubled,’ unmoved, stable, blank, or flat like a dash, despite the catastrophe everywhere around him”). She also in her concluding chapter juxtaposes the poetry of Clare with the condition of abandoned houses in Detroit. A picture of one graces the cover the book. 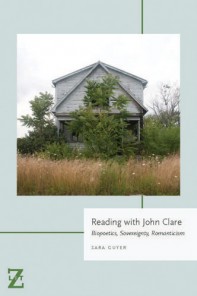 What a clear way of bringing the poet back in the world and avoiding transcendence.