Other titles in the series are Touch Will Tell and Walk With Your Eyes. The one that interests me is Listen to a Shape. It seems to harken more to the synesthetic experience. All are with words and images by Marcia Brown.

Listen to a Shape positions its opening under the sign of a curled fern frond or fiddlehead. It promises to bring to fruition the metaphorical import of roundness.

ROUND curls up
on itself.
Round things
bring you back
to where they
started.

And faithfully the book ends with an illustration of unfurled fronds.

Round objects also fly you around the world in this age of searchable clip art.

There was once a restaurant in Nanaimo called the Fiddlehead Bistro and I have here borrowed its logo with a horizontal flip. 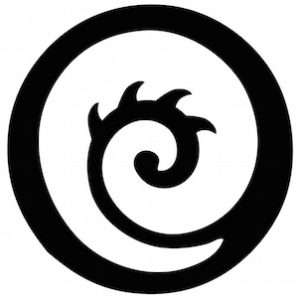 Almost like a Japanese crest. Trace of an artist who has truly listened to shape.

This entry was posted in Perception, Poetry. Bookmark the permalink.
This site is part of Humanities Commons. Explore other sites on this network or register to build your own.
Terms of ServicePrivacy PolicyGuidelines for Participation