The Print, The Step

Posted on February 29, 2012 by Francois Lachance

As if each moment were a monument

Not every happening qualifies as an event.

Two lines that bring to mind for me the subtle art of Jeff Hill who did the decorations and lettering for Peter Pauper Press’s Cherry-Blossoms: Japanese Haiku Series III (1960) 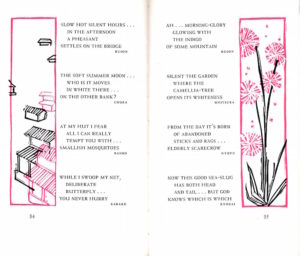 I treasure the finesse of the block like elements of the houses or huts on the left. Some just over the window-like frame. Some overlapping red on black.

Such illustration is worthy to be called an event. It happens as if each monument were a moment.

This entry was posted in Poetry and tagged haiku. Bookmark the permalink.
This site is part of Humanities Commons. Explore other sites on this network or register to build your own.
Terms of ServicePrivacy PolicyGuidelines for Participation