Posted on January 19, 2012 by Francois Lachance

I think this guy looks like the Planter’s Peanut Man. Put out by the Scarborough Health Department in association with others across Metro Toronto (before the city was amalgamated), its rhymes underscore that practising safe sex is a class act: Evening Wear for Lovers Who Care. [Picked up by the Aids Committee of Toronto (ACT) – see the stamp in the corner.] 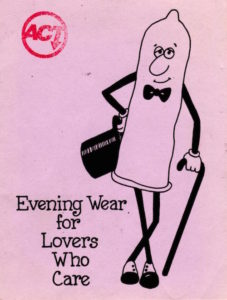 Our next example hails from Ottawa and is bilingual. And as with all good campaigns eschews clunky translations for two totally different was of expressing a similar message. All in one dual purpose pamphlet. 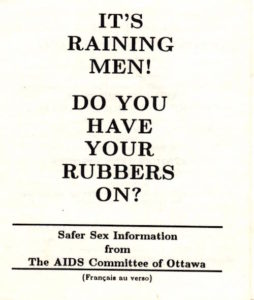 DO YOU
HAVE
YOUR
RUBBERS
ON? 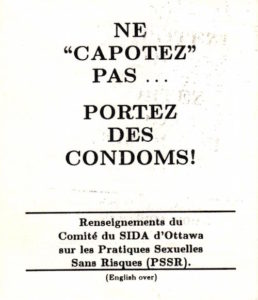 I do particularly like the appropriation of the popular disco tune… And in French note the savvy wordplay on loosing one’s head which shares the same signifier for the slang for condom.

This entry was posted in Ephemera. Bookmark the permalink.
This site is part of Humanities Commons. Explore other sites on this network or register to build your own.
Terms of ServicePrivacy PolicyGuidelines for Participation