Not So Long Ago

Posted on January 18, 2012 by Francois Lachance

First a description of the product and its cross-cultural appeal.

Known as croccante to the Italians, praline to the French and turrón to the Spanish, such a golden nutty sweetmeat is better known here in Britain as brittle or, occasionally, cracknel. Although methods and results differ slightly from country to country, the marriage of warm, freshly roasted nuts and glistening caramel lives up to its name. The nuts are cracked, then snap and spit in the caramel. The brittle will crackle as it cools and then shatter as you break it into shards for crunching between the teeth.

Given Slater’s praise of the nut and caramel confection, it is no surprise that I was attracted to a little pamphlet from the Green Orchid in New Orleans presenting the “Story of the Praline”. Its cover should have alerted me but I thought it was similar to pancake mix from Aunt Jemima. 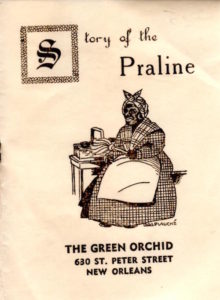 A search for “Green Orchid + New Orleans” led me to the blog of Dave DeCaro who was tempted then put off:

Anyone care to sample Ma-Lou’s Pralines? I wouldn’t mind some crumbled over vanilla ice cream. This one is from June 1962

My inner sign-geek is telling me to get a closer look at the signage of the Green Orchid: 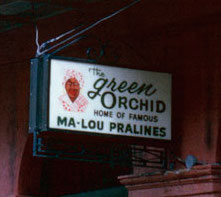 In case, you may wonder about judging by covers, consider this from Creating the Big Easy: New Orleans and the Emergence of Modern Tourism, 1918-1945 by Anthony J. Stanonis

New Orleans businesses capitalized on the mammy image. The Green Orchid, a prominent French Quarter store, offered tourists a booklet that explained how the “outstanding candy of the old Negro mammies, has become synonymous with New Orleans.” Delicious pralines, loyal mammies and the Crescent City were tightly bound together. Léda Plauché, who operated the Green Orchid, named the confections “Ma-Lou Pralines,” an abbreviation for “my old Negro mammy, Marie-Louise.” The shortened version, done for “commercial purposes,” not only stripped the black figure of a name suggestive of her Creole roots — and possibly mixed bloodline — but also presented her as motherly. Playing on tourists’ curiosity, Plauché had cooks don costumes and opened the kitchen to the public, providing “the only place in New Orleans where you may see mammy making pralines.” The Green Orchid was not alone in manipulating the mammy image for financial gain.

46 pp. Pictorial wrappers. First Edition. New Orleans: Green Orchid Gift Shop, c.1940’s. Inscribed & SIGNED by the author on front free endpaper. Léda Hincks Plauché (Mrs. Henry Plauché) was born in New Orleans in 1886. She designed her first Carnival ball for the Krewe of Nereus in 1916 and, over the next forty years, she included the krewes of Rex, Proteus, Comus, and Momus among her clients. Mrs. Plauché was also the proprietor of the Green Orchid gift shop in the French Quarter. She died in New Orleans in 1980. In 1958, Léda Plauché donated a large collection of Mardi Gras costume and float designs and a smaller collection of photographs to the Louisiana Department (now Division) of New Orleans Public Library. Fine. $65 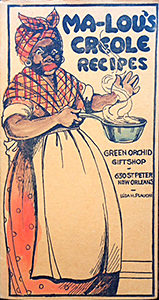 So the little pamphlet on pralines originates somewhere between the 1940s and the 1960s. But parts of its text still sting (well beyond the appropriation signalled by Stanonis). This for me is simply eye-popping:

These faithful old darkies loved to adopt family names and to mimic what the “Boss” did so mammy named her candy Praline, feeling quite sure that if what came from Paris was good enough for her “Missus”, it was good enough for her. So the Praline, outstanding candy of the old Negro mammies, has become synonymous with New Orleans!

Having explored the discourse surrounding this sweet I have a greater appreciation for what “normalizing” means in an American context.

This entry was posted in Ephemera, Food Writing. Bookmark the permalink.
This site is part of Humanities Commons. Explore other sites on this network or register to build your own.
Terms of ServicePrivacy PolicyGuidelines for Participation