Posted on January 4, 2012 by Francois Lachance

Freda Guttman at A Space http://www.aspacegallery.org/index.php?m=programdetails&id=79

In Memoriam consists of three 1930-40’s upright radios, large and ornate, their inside workings removed. The radios have a metaphorical role — presences, speakers, ghosts of the past, warning voices that remember Walter Benjamin’s life and work, and remind us of his prescient understanding of the revolutionary significance of new technologies, as well as their impact on the production of art. Five large Jacquard tapestries will be hung on the walls in a relationship to the three radios. Thematically, they refer to instances in the 20th century of violent events, such as the coup in Chile in 1973, the Hitler era, the bombing of cities in World War II.

One radio in particular attracts attention. It bears a reproduction of Klee’s “Angelus Novus”.

Guttman presents us with a recontextualization of Klee’s “Angelus Novus”. This rendition and in the particular manner in which is mounted makes one return the ninth of Benjamin’s Theses on the Philosophy of History.

A Klee painting named ‘Angelus Novus’ shows an angel looking as though he is about to move away from something he is fixedly contemplating. His eyes are staring, his mouth is open, his wings are spread. This is how one pictures the angel of history. His face is turned toward the past. Where we perceive a chain of events, he sees one single catastrophe which keeps piling wreckage and hurls it in front of his feet. The angel would like to stay, awaken the dead, and make whole what has been smashed. But a storm is blowing in from Paradise; it has got caught in his wings with such a violence that the angel can no longer close them. The storm irresistibly propels him into the future to which his back is turned, while the pile of debris before him grows skyward. This storm is what we call progress.

On its own, the depicted angel doesn’t quite look as if it’s looking backwards and indeed a rereading highlights the suggestiveness of Benjamin’s prose which indicates that the angel appears to be about to turn away from something. (That something is the viewer which via Benjamin comes to occupy the position of the past.) 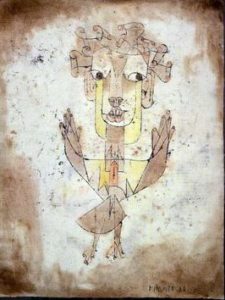 It is not just having a reproduction of the Klee painting at hand that leads to a reappraisal of the relations between the angel from the painting, the angel from the excerpt from poem by Scholem which Benjamin places as an epigraph to the ninth thesis and the angel caught in Benjamin’s storytelling whose image is taken up again by artists such as Laurie Anderson in her music (Strange Angels).

My wing is ready for flight,
I would like to turn back.
If I stayed timeless time,
I would have little luck.

It is very much having a partition over the reproduction — Guttman places the tapestry as the speaker screen in a refurbished radio (an older model from the period when radios were items of furniture) — that guides the viewer to be attentive to the position of the feet and the orientation of the eyes of the depicted figure. Just what counts as backwards is very much a question of “as though”. 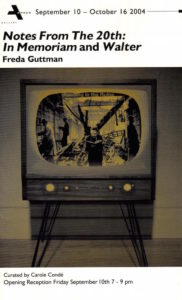 In the A-Space take away, Peter White comments on the status of “Klee’s painting Angelus Novus, the pivotal figure of Benjamin’s famous ninth thesis on the conception of history”:

For my part, I seem to want to think about this image of Benjamin as an analogue, but in reverse, for his angel of history. Faced with the accumulated wreckages of history, it is the angel’s fate to be forcibly propelled into the future. I wouldn’t want to describe Benjamin or anyone else for that matter, as an angel, but he is perhaps as close to a prophet as the twentieth century produced. If you think of him in this piece as he imagined the angel, back turned to the future, what is pictured is not so much his era as what he feared so deeply, its perpetuation.

A note on technique:

Benjamin never so much wrote about his own times as he wrote through it. His writing was constructed in layers and he approached it as means of “drilling” for the truth.* If our postmodern condition tends towards the use of appropriation, pastiche and sampling as the norm, then the foundations of this condition can be traced back to Benjamin’s use of citation and montage as a means of intellectually capturing the vicissitudes and complexities of the Modern age. Guttman not only understands this, but wisely uses this same oscillation as a means to propel her own project effortlessly from present to past and back again.

* “… to plumb the depths of language and thought … by drilling rather than excavating” Walter Benjamin quoted by Hannah Arendt, “Illuminations,” Schocken, 1969 p 48.

And so to conclude let us juxtapose a quotation from Catherine Hume, singer-songwriter, from her 1999 album Hinges. The refrain from “Fallen Angel” …

No knowing which way that door leads — a past? a future?