Posted on November 28, 2011 by Francois Lachance 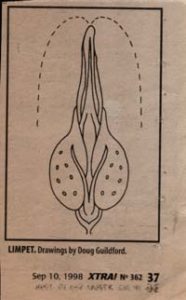 … between natural and cultural preoccupations …

Doug Guildford splits his time between his studios in downtown Toronto and on the South Shore of Nova Scotia. His practice is rooted in drawing, entrenched in print making and allows for obsessive crochet projects. “My drawing and print work wash back and forth between natural and cultural preoccupations and relate directly to my ongoing body of crocheted sculptural pieces that I refer to as Nets.” His work comes directly from time spent between the tides of the North Atlantic Ocean. Guildford believes in the essential value and the ultimate futility of work.

It’s the symmetry and the heavenly phallic connotations that led me to clip and save this image from Xtra! No. 362 (September 10, 1998).