A 1914 pamphlet, “PLAYGROUNDS: One of Canada’s Great Needs” billed as a “Call to service for the children of the future” authored by J.J. Kelso, Superintendent of Neglected and Dependent Children of Ontario. 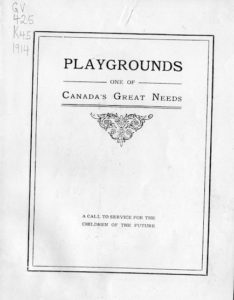 The pamphlet urges the founding of playground associations and calls for active participation of the officers (as opposed to being mere figureheads).

People should be selected for office who are really interested and willing to exert themselves to make the movement a success. Too often men are elected to office in such societies because of their prominence, and without any expectation that they will be more than figureheads. Enthusiasm can only be sustained by frequent meetings and zealous, active service.

As a fitting prelude to involvement, I like the frontispiece which encourages a snow-ball fight. 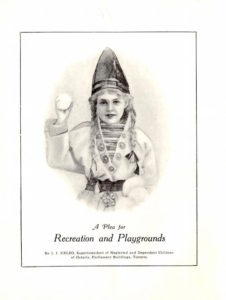 No contest she’s a winner.