Of Ghosts and Harps

From the program notes from a performance of the initial section of Beowulf by Benjamin Bagby.

The instrument acts as a constant point of reference, a friend and a fellow-performer, a symbol of the scop and his almost magical role in the community of listeners.

Reminds one of Philip Pullman on the writing life (reprinted in The Observer Book of Books 2008).

Every sentence you write is surround by the ghosts of others you might have written, except while they are invisible to everyone else, you can still see them. Sometimes they gesture threateningly, with accusations in their eyes. But you have forbidden them to speak; eventually they fade and drift away.

And back to the program notes:

The harp is a relatively quiet instrument, but in the ear of the performer it rings with an endless variation of gestures, melodic cells and repetitive figurations which give inspiration to the shape of the vocalization: in the course of the story the vocalist may move imperceptibly or radically between true speech, heightened speech, speech-like song, and true song. 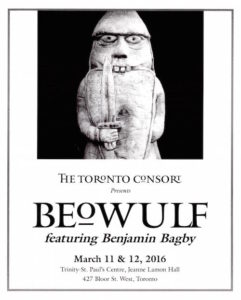