Reprinted in Intertwining, John K. Grande’s review of the 1992 Paul Grégoire show “Alzheimer Social” at the Circa Gallery in Montreal likens the work to other artists.

Paul Grégoire’s creations recall Edward Kienholz’s Pop art recreation of aging insomniacs in The State Hospital (who cannot dream of another reality than their own) […] His [Grégoire’s] disappointment is as much with his own self-constructed illusions of reality as with the status quo of the species homo sapiens.

Impelled by Grande’s allusion, I sought out more information about The State Hospital piece and found Shelly Couvrette providing this description. http://www.cat-sidh.net/Writing/Kienholz.html (no mention of insomnia)

When giving the piece a superficial glance, all that is visible is a large, crate-like box. Details do not become obvious until one looks more closely. The form of the box creates a hulking, institutional-white outer shell. Closer observation reveals a padlocked door in the center of the front wall. In this door is a small, square, window with three bars. High in the upper left-hand corner of the wall is a sign reading WARD 19.

One must approach the barred window to see inside. There is a smell of disinfectant spray. The room is lighted by a single, bare bulb dangling from the ceiling. The scene that it illuminates is repulsive.

There are two identical figures lying on institutional-issue, metal bunk-beds, one upon each bed. Each is shackled to the frame of his bed by a leather strap and wrist-cuff. Their bodies are a pus-like yellow color, roughly rendered with congealed drips and lumps of resin. The figures have the appearance of emaciated mummies. Their bodies rest on thin, blue and white striped mattresses that are filthy and ragged. The figure resting on the upper bunk is encased in a elliptical neon tube; a thought bubble from a comic strip. The tube glows an ominous red. The heads of the men are made from illuminated fish-bowls. Two black fish swim in each bowl. There is a small, and apparently purposeless, hospital-issue bedside table against one wall. A bedpan rests on the floor, but it is not within reach of the bed.

On formal grounds, I agree with a rapprochment between Kienholz and Grégoire (both refigure and pose human forms) but am troubled by the interpretative twist that hints at a strong dose of misanthropy. I think Grégoire demonstrates mirth.

Grande would agree (though I think that there is more mirth than Grande would attest). In his penultimate paragraph he states that “[t]he most lighthearted pieces in the show are those that simply poke fun at the old-fashioned avant-gardist notions of art.” As proof of the case he suggests an intertextual relation to the work of Hans Haacke.

Likewise, Grégoire’s plexiglass cube of water that carries the caption “J’ai soif (I am thirsty)” inverts Hans Haacke’s minimalist motif on encubed condensation to send it straight back from whence it came, to let nature have the final word.

But allow a word from Haacke …

I have partially filled Plexiglas containers of a simple stereometric form with water and have sealed them. The intrusion of light warms the inside of the boxes. Since the inside temperature is always higher that the surrounding temperature, the water enclosed condenses: a delicate veil of drops begins to develop on the inside walls.

At first they are so small that one can distinguish single drops from only a very close distance. The drops grow, hour by hour, small ones combine with larger ones. The speed of growth depends on the intensity and the angle of the intruding light. After a day, a dense cover of clearly defined drops has developed and they all reflect light. With continuing condensation, some drops reach such a size that their weight overcomes the forces of adhesion and they run down along the walls, leaving the trace. This trace starts to grow together again. Weeks after, manifold traces, running side by side, have developed. According to their respective age, they have drops of varying sizes. The process of condensation does not end.

The box has a constantly but slowly changing appearance that never repeats itself. The conditions are comparable to a living organism that reacts in a flexible manner to its surroundings. The image of condensation cannot be precisely predicted. It is changing freely, bound only by statistical limits. I like this freedom.

And now a picture 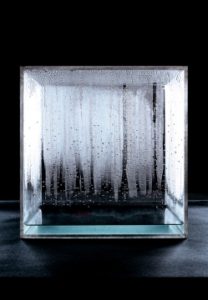 I have been unable to access the archives of the Circa Gallery for 1992 to find an image to document Grégoire’s cube. The one that sends us back to nature. I have however found in the artist’s own documentation of his sculptural work a 1984 piece with the similar title, “Le grand cri de la soif”. 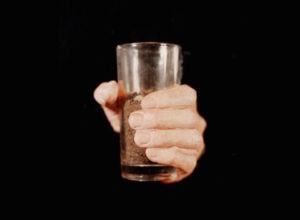 Intertexts. Condensations. Displacements. All with the thirst of a light heart.

This entry was posted in Uncategorized and tagged Intertexts. Bookmark the permalink.
This site is part of Humanities Commons. Explore other sites on this network or register to build your own.
Terms of ServicePrivacy PolicyGuidelines for Participation