D.D.C. [Douglas] Chambers reviewed three books of poetry: Orgasms of Light: The Gay Sunshine Anthology edited by Winston Leyland, The Dead Slave and other poems of Martial by Kenneth Hopkins, Uranian Roses by Tom [Thomas] Meyer, in The Body Politic May 78, Issue 43, p16. He plays upon this trope of forebears to give depth to comparisons of worth. Note here his framing of Hopkins’s little book from Catalyst Press.

What is good about this is that it draws our attention, as does Kenneth Hopkins’s collection of epigrams by Martial, The Dead Slave, to our literary ancestry long denied. It is surprising enough that these poems have never before been translated; it is even more surprising that the translations are good enough to merit comparison with the work of Ben Jonson or John Donne, the great English imitators of Martial.

Chambers with his use of italics is here winking at the pretense of translation and vouching for the authentic value of imitation. [Hopkins’s imitation was indeed fabrication.]

As David Mason reports in a review of Books in the Blood: Memoirs of a Fourth Generation Bookseller about Anthony Rota, a friend of Kenneth Hopkins.

This account is tinged with sadness for me because one of those days is spent travelling to consult about the dispersal of the library, after his death, of his old friend [and mine] the poet, writer and book collector Kenneth Hopkins. Hopkins, a man of great charm and enormous learning, was poor all his life except in friends and books. He wrote several books on the history of English poetry and several volumes of poetry himself. He once published [in Toronto, incidentally] a pamphlet with some newly discovered poems by the Roman poet Martial which were very favourably reviewed in an academic journal, a review which greatly delighted Kenneth since the publication was a fraud, all the poems attributed to Martial having been composed by Kenneth himself. They were good poems too, even the reviewer said so.

Hopkins, too poor to collect the major poets in England, got the idea to build a collection of minor poets of the nineteenth century. During many years haunting bookshops, he had bought every book of nineteenth-century poetry he saw which was by an obscure or unknown poet. Because of this Hopkins had a comfortable old age, for after many years amassing this huge collection, Rota sold it for him to an American university that like most of the others had neglected the minor poets while they sought the major ones. At the risk of appearing to be one of that ignoble breed, a punster, I cannot help saying that this seems to me to be a perfect example of ‘poetic justice’. This is also one of the best examples I know of which confutes the erroneous view that one must be wealthy to build an important collection. Not money but imagination and passion are the real essentials of successful book collecting, as Hopkins proved. He ended his life travelling, dining with friends and, of course, buying books. Rota reports that despite the space created by such a massive sale, at his death Hopkins’ house was once again overflowing, bursting with books.

Before turning to quote from Hopkins, one epigram from Thomas Meyer in one of the other books reviewed by Chambers. From Uranian Roses with its pleasant tender double entrendre

If he doesn’t come
in the next hour
it’s all off.

I he shows up
tomorrow …

Hopkins’s epigrams would answer — too late — for death is like a thief, day or night. These are the last three epigrams in The Dead Slave arranged in Hopkins’s order but numbered as he says according to the manuscript which gives us two alternative orders or rather a double reading: one top to bottom, the second bottom to top as guided by the note on ordering.

Perfect in grace, perfect in every limb,
The one thing wanting was but human breath;
Surely a kiss would breathe back life in him!
I never before thought beauty lived in death.

They bore him from my presence, and I wept;
In my own bed that restless heart was stilled;
After he laughed, and tumbled as I willed,
I thought him sleeping, so I turned and slept.

Ep IX
They told me he was dead: I disbelieved;
How could my light go out, and nothing said?
He seemed immortal, but I was deceived;
Shall I, shall any live, and he lie dead?

I never thought beauty lived in death … and the cover by Lennel Goodwin attests that the signifier “dead” may be given grace and by such grace hint that “forge” relates not only to swords, partnerships and signatures but to poems enlivened by typography. 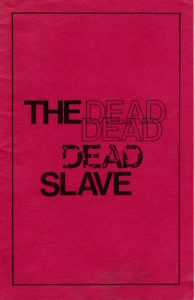 This entry was posted in Poetry, Translations. Bookmark the permalink.
This site is part of Humanities Commons. Explore other sites on this network or register to build your own.
Terms of ServicePrivacy PolicyGuidelines for Participation