Posted on December 1, 2010 by Francois Lachance

Four Ages of Man: The Classical Myths by Jay Macpherson is a tour through Greek and Roman mythology for high school students. The last chapter is devoted to “The Passing and Afterlife of the Gods” and ends thus — almost as an invitation to study nursery rhymes.

The Pied Piper who can draw rats by his piping is ony one of many magical musicians whose gifts recall those of Orpheus. Psyche’s task of sorting a heap of seeds occurs in many familiar stories, and she herself and her mysterious lover meet us again in the tale of Beauty and the Beast. And where was it that we first met Endymion, the sleeping shepherd?
Little boy blue, come blow your horn,

The sheep’s in the meadow, the cow’s in the corn.
Where is the boy who looks after the sheep?
He’s under the haystack, fast asleep.
Will you wake him? No, not I;
For if I do, he’s sure to cry.

The disposition of the lines is a bit different in the example collected by Iona and Peter Opie in The Oxford Nursery Rhyme Book illustrated by Joan Hassall. 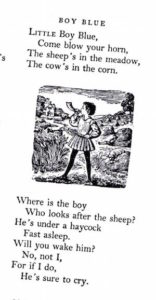 With a magnifying glass one can make our the cow on the right in the corn (grain) and on the left foreground the sheep and behind on the left the little boy asleep near a haystack.

Jay Macpherson chose an illustration that proves her point about longevity and transmutation of stories. 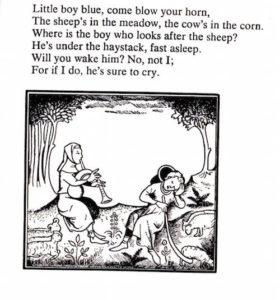 In her notes she explains: “The sleeping shepherd (illustration): this is actually a French mediaeval illustration to the tale of Hermes and Argus. Both are dressed as peasants, and Hermes plays, instead of the classical shepherd’s pipe, a simple form of bagpipe.” These two different visual treatments of the same poem remind me of emblem books where there is also much borrowing and lasting life.