Of Mamas and Moments

Posted on October 29, 2010 by Francois Lachance

Bless YouTube and Michael McKay. [Well for a time anyway – the video has been taken down]

The 1994 production of Brad Walton’s Baroque-style opera The Loves of Wayne Gretzky as performed and recorded on February 13, 1994 at Symptom Hall in Toronto is available for viewing. In it, Gretzky leaves his wife for Mario Lemieux. Lovely tongue-in-cheek warning on the site *WARNING: DEPICTIONS (ALBEIT CHASTE AND CAMPY) OF HOMOSEXUALITY. VIEWER DISCRETION IS ADVISED*

Kept the program as a keepsake. 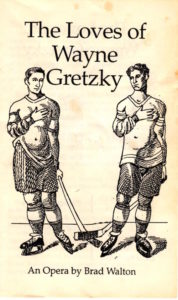 I recall a spectacularly hilarious scene with David James as Mama Gretzky. As the program notes state: The role of Mama Gretzky was written with a special view to exploiting David’s peculiar talents.

[It was] Nice to be able to have access to a recording of a classic event.