Posted on September 16, 2010 by Francois Lachance

Signage that is memorable.

There are the magnificent murals of Pour Boy. Where one assumes that a poor boy (or girl) can quaff a modestly priced brew.

Apiecalypse Now! – That’s pie as in pizza in case you missed the pun and it’s animal friendly vegan hence the cute racoons sharing a pie.

When you need some building maintenance done right go to the fancy spellers at DunRite with a long top on the T. 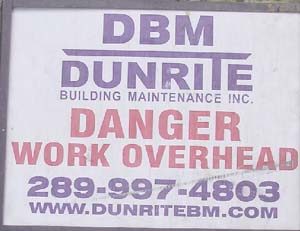 Which on the company web site looks slick thanks to the Mississauga designers at Reaction Grafix still retaining that swish T. 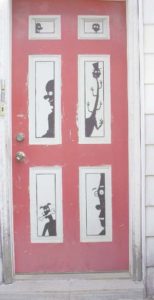 A door to domestic space on Bathurst street south of College looking smartly like the frames of a graphic novel devoted to canines.

Such collecting is inspired by the Dictionary of Words in the Wild at http://lexigraphi.ca

This entry was posted in Uncategorized and tagged Pun, Trouvailles. Bookmark the permalink.
This site is part of Humanities Commons. Explore other sites on this network or register to build your own.
Terms of ServicePrivacy PolicyGuidelines for Participation