Posted on September 9, 2010 by Francois Lachance

It reads like a parody of the Little Free Library outposts. 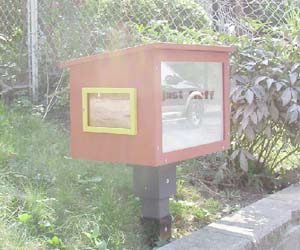 Welcome to the installation. With text and fibre. 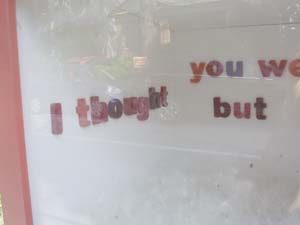 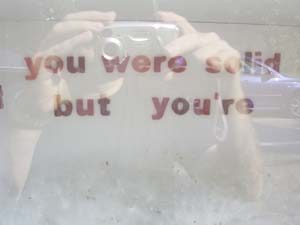 Back panel: you were solid / but you’re

The picture here captures the shutter-bug and brings to mind the title of a show of Allen Ginsburg snapshots: “We are continually exposed to the flashbulb of death” (Curated by Barbara Fischer and John Shoesmith at the University of Toronto Art Centre).

The finale — the bed of milkweed [?] seeds and the third wall — is best visited in the documentation provided by the Open Field Collective. “I thought // you were solid / but you’re // just fluff” 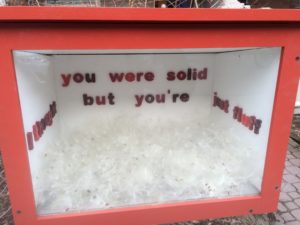 The piece is by Erika James and was viewed on Grace Street below Bloor in Toronto. And for some reason reminds one of Hamlet: O that this too sullen flesh —- oops that should be “solid flesh” — or should it?

Many scholars ask whether Shakespeare intended “solid” to be actually “sallied”, a form of the word “sullied.” The second quarto of Hamlet contains “sallied”, but the First Folio prints it as “solid.” Modern editors have been quite divided on the issue. Editors of The Arden Shakespeare choose to use “sullied”, while editors of The New Cambridge Shakespeare have decided upon “solid.” The reasoning for the use of “solid” is fairly evident, as it logically corresponds to “would melt” (131). However, there are good arguments to support the claim that Shakespeare did mean “sullied.” With “sullied” we have the “suggestion of contamination” (Jenkins, 437), which is apparent throughout the soliloquy.