Alexander McCall Smith, “The Unfortunate Fate of Kitty da Silva” in One City (in support of Edinburgh’s OneCity Trust)

This fictional tiger makes its way at the end of the story into the dialogue of two characters and becomes a symbol of their mutual understanding of a story of convenience about the equally fictitious Kitty.

‘How is Kitty da Silva?’ she asked suddenly. ‘How is she?’

He said nothing for a moment; a silence of the human heart.

She looked up with a start. ‘No more?’

‘She went for a walk in the forest up in the hills,’ he said. ‘She was eaten by a tiger.’

She looked at him in astonishment, and then, understanding, she began to laugh.

Alice Walker, Introduction to “Once” section of Her Blue Body Everything We Know: Earthling Poems 1965-1990 Complete

There is a poem from this period that I wrote when a friend pointed out to me that I could not call the first section “African Images, Glimpses from a Tiger’s Back,” because, he said, “There are no tigers in Africa!”

There are no tigers
in Africa!
You say.
Frowning
Yes. I say.
Smiling.
But they are
very beautiful.

The remarkable non-goodbye leave taking of Richard Parker, the tiger.

I was certain he would turn my way. he would look at me. He would flatten his ears. He would growl. In some such way, he would conclude our relationship. He did nothing of the sort. He only looked fixedly into the jungle. then Richard Parker, companion of my torment, awful, fierce thing that kept me alive, moved forward and disappeared forever from my life. 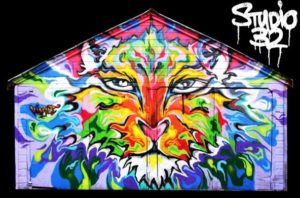 This is located on Dupont Street near Spadina on the side of an-about-to-collapse garage (at the very least it suffers from severe curvature of the spine in the central roof beam). Studio32 is the mark of José-Gabriel [Sandoval] a painter, designer, curator, creator and a graffiti writer in Toronto.

This entry was posted in Poetry, Storytelling. Bookmark the permalink.
This site is part of Humanities Commons. Explore other sites on this network or register to build your own.
Terms of ServicePrivacy PolicyGuidelines for Participation