Who is GS whose initials are in tiny type at the base of this poem in praise of the American sculptor Louise Nevelson? 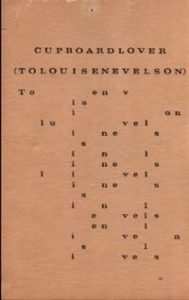 The title and dedication are made of bunched up letters and subsequent letters rain down in lines which with a bit of patience can be read along the horizontal.

The following lines with some reassembly give

To envision loveliness
in lines
liveliness in levels
enlivens lives

Of course my line breaks are a wee bit arbitrary. So is my stab at identifying GS — Gilbert Sorrentino? But he’s not known as a concrete poet. Could it be George Stiles who is annotated as G.S. in a number of bibliographic references to art criticism that appeared in Pictures on Exhibit?

There is possibly a connection via Thom Gunn (he appears in an anthology edited by Geoffrey Summerfield). Gunn and Chambers had an active and extensive correspondence. One of the items listed in the finding guide to the Chambers and Gunn papers in the Thomas Fisher Library is correspondence from Geoffrey Summerfield (Box 1, Folder 15). And there are art cards in other boxes and folders. The archive beckons.