Ascribing We Will Go

Either incipit and colophon, it came to me from my friend the translator and editor Diana Kuprel. A piece of ephemera in a package produced by the St. Michael’s College Press. Without attribution. Nicely set. 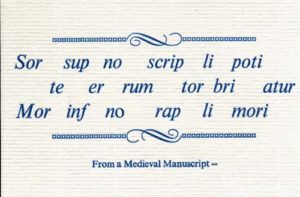 A border of two destinies touching upon each other almost interwoven.

Which reconstructed with the overlapping bits, reads

This version is care of David Harvey, University of Exeter, via personal communication to Mark Drogin (pages 90-91, Anathema!) which came to me via “Bibliomania and the Medieval Book Curse” by Sandra Anderson which paper was written for the LIS 586 – History of the Book course at the University of Alberta. It was posted to the web in March 2003 as part of a capping exercise for the completion of a Master of Library and Information Studies degree.

Still no idea what manuscript this curse/blessing comes from. I have in my searches found some variations:

For those interested in tracing down the manuscript sources for some these intertwined inscriptions from anonymous scribes, please consult the multivolume Colophons de manuscrits occidentaux des origines au XVIe siècle. Bénédictins du Bouveret. (Fribourg, Suisse : Editions Universitaires, 1965-1982). And many happy searches beyond (such is my curse and blessing).