On the Ides of March, perfect to document a very old joke. 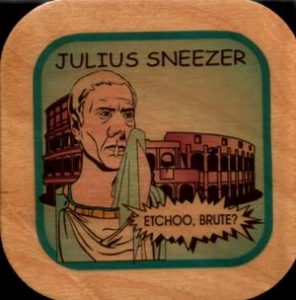 This image reminds me of the line drawing illustrations in old Latin readers. It is from a coaster that I found. It may have belonged to a set. It was all by its lonesome and I thought deserved some recognition.

I have since discovered that the joke dates back at least to the 1940s in the United Kingdom from a cartoon strip named “”Julius Sneezer, the Sneezing Caesar”. Catchy.

This entry was posted in Ephemera and tagged Pun. Bookmark the permalink.
This site is part of Humanities Commons. Explore other sites on this network or register to build your own.
Terms of ServicePrivacy PolicyGuidelines for Participation