This was torn out of a larger sequence and as I mused in Portrait and Landscape the orientation of the lay out sometimes affects the texture of the reception. Here in blocks along the vertical:

And an image of the horizontal layout: the howl pulsating at the same time as the woolf cries repeat over and over. 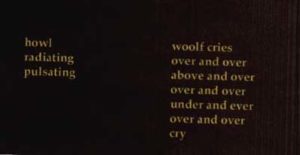 If you know a little about the story of Remus and Romulus, you know that rival hills play an important aspect — not too much of a stretch from hills to separate stanzas.